Coin Master is ready to challenge you in the new Tournament! ⎼ a fun new multiplayer event that allows players to compete with one another and track each others’ progress!

Players are split into groups and compete to become the number 1 Coin Master on the Tournament leaderboard!

In order to join the tournament, each player will first need to earn a certain number of Tournament points by fulfilling various actions including Attacks and Raids.

Every action completed will be reflected on the trophy icon seen at the top right corner of the screen! This number will represent your rank on the leaderboard where you will also be able to see your potential rewards as well as the stiff competition ahead!

What is Tournament Milestone?

This new feature of the Tournament gives the ability to win incredible rewards while competing for the top ranks on the leaderboard!

A progress bar with a number of rewards will appear presenting the opportunity to win several rewards with items such as Spins, Coins, Pet XP, Pet Treats, or Gold Cards. Each tournament milestone bar can be completed a number of different times as displayed above the progress bar.

Tapping on each reward on the bar will show it's contents as well as how many points are needed to collect it, and tapping on the tournament icon on the left side of the progress bar will show the final reward which can be won. 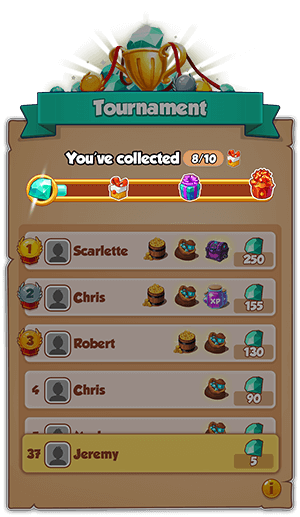