Attacks, which are represented by Hammers on the slots, are a way for players to earn coins while also adding challenge to their friends’ quests to finish their villages.

When you land an Attack on the slot machine, the game will automatically transport you to a village of a random player or friend, and there you will have the option to either attack that player or choose someone else from your “Friends” or “Revenge” lists which are displayed at the top of the screen. 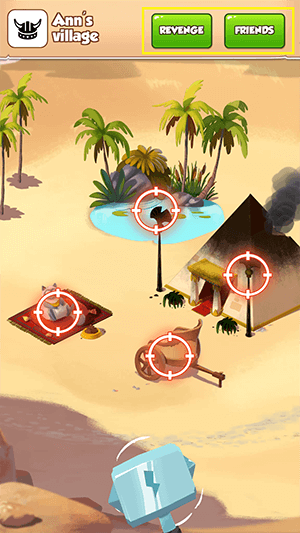 How to fix a village ?

When a Village is attacked, you will have the option to fix your damaged structures by tapping the “fix” button that hovers over them.

An item that is directly hit will be reverted back one stage and remove one Star from the total number collected. 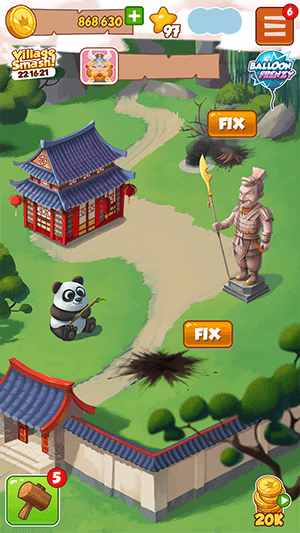 How to protect your village from attacks?

There are two ways to protect a village from Attacks.

The first is by using shields; when a player attacks your village the shield will protect your items automatically and break in the process.

The second way to protect a village is by hatching the Rhino pet. When you do not have any shields, the Rhino will have a certain percentage chance of blocking the attack.

To learn more about the Rhino, please refer to this Article.

How much damage does an attack do?

Without a shield, an Attack from another player reverts the item hit back one level. This also removes a Star from the total number the Attacked player collected.

If the player being attacked is protected by a Shield or the Rhino, the oncoming Attack will be deflected and will not damage the Village.

How to take revenge?

When you spin and land on an Attack, the game will transport you to a random Village of one of your friends or of a random player for you to Attack.

At the top of the screen, you will see the “Revenge” button. Tapping this button will reveal a list of the last number of players who attacked you and will let you choose which one to exact your revenge on.